Sorry a thousand times for being so slack with my blog. Life etc has gotten in the way a bit and while I have painted my nails I haven't had time to post them here.

This is Dior Acapulco, a warm, primary yellow creme. I'm not generally one to spend $39 on a single bottle of polish but I've been hunting for a decent yellow and decided to treat myself - this is my first "premium" polish :) For this manicure I first painted my nails white (with Face of Australia's Cool Cotton) so that I wouldn't have any visible nail line - I believe Acapulco is slightly jelly-like on its own. I used three coats of Acapulco to get a completely even finish as it streaked slightly on the first two coats. With three coats though it's nice and even and dries very shiny.


A day after applying this manicure I went to visit my parents and I had a package waiting for me - with nail polish in it! And not just any old polish, but two gorgeous colours from Lush Lacquer! My gorgeous cousin Bek had ordered them for me for my birthday. I had two try out Hey Jack! straight away. Hey Jack! is from the halloween collection and is a mix of tiny hex and bar white glitter, different sized black hex glitter, small shiny orange hexes, and medium matte orange hexes. This is one dabbled coat on my ring finger, and I think the colours go really nicely with the yellow, even though it's not halloween anymore. I might try this over Revlon Royal next time :)

The formula on Hey Jack! was excellent, not thick or gloopy at all and packed with glitter, I didn't have to fish for any of the glitters to get them all on my nail. It does dry quite textured and needs either a really thick top coat like Gelous (which I don't have but am going to buy) or multiple layers of top coat.

Robyn x
Posted by Unknown at 10:10 AM No comments:

Another lovely bright creme for you today. This is Sportsgirl Arctic Glamour. 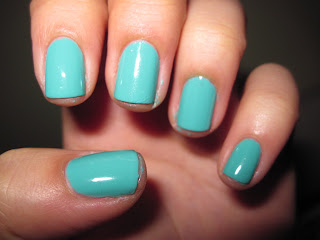 I'm not really sure why this is called Arctic Glamour, as it seems more of a 'hot' colour to me, but this is a saturated turquoise which is more green-leaning in real life but surprisingly does not give me lobster hands. Application on this was ok. I didn't give the bottle enough of a shake before I tried my first coat and so it came out a bit watery with clumps of pigment, which might actually be an interesting look, but  after a vigorous shake it's very even, with a nice shiny finish. This is three coats with topcoat but the topcoat didn't make a huge amount of difference to the shine (I just wear it out of habit otherwise my manicures would never last more than a day). This colour is currently in stock at Sportsgirl but if you want it it's probably best to head down to grab one sooner rather than later, as Sportsgirl tends to change their colours fairly often.

Robyn x
Posted by Unknown at 8:43 PM No comments:

Oh gosh. I love this polish. I already gushed about it in my skittles mani, but holy CRAP is this polish ever the most wonderful piece of $2 polish magic I have ever had the pleasure of randomly pulling out of a plastic bin. 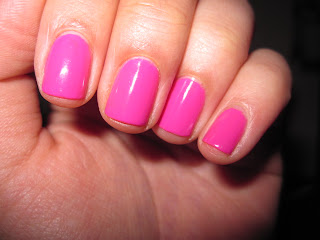 Thin, even, buttery, perfect, perfect brush, opaque in two coats, and a ridiculously flattering bright-without-being-neon pink which made me go "hey, maybe I should wear more pink". Sure, they spelt "fuchsia" wrong on the bottle, but I'm willing to let it slide because this polish is glorious. If it weren't for the fact that I'm trying to wear everything in my stash at least once before doing a repeat mani, I would wear this again for sure. This is two coats with top coat.

I should add that this is the Australian-made EF, and the newer PRC version is (I think) a bit more purple looking than this. However, you might still be able to find this - I got this only a couple of weeks ago at Target on Bourke Street in Melbourne.

Robyn x
Posted by Unknown at 8:39 PM No comments:

Another skittle manicure today, I think this colour combination works a lot better than the last one. I used all Ulta3 polishes for this manicure and they are: 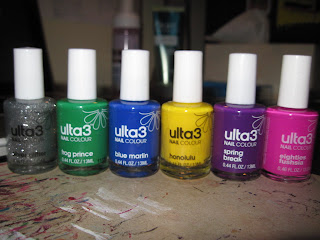 Silver Glitter, Frog Prince, Blue Marlin, Honolulu, Spring Break and Eighties Fushsia (I know it's not spelt like that but that's what it says on the bottle!)

Application on these varied. Eighties Fuchsia was the BEST. Buttery, even, self leveling, perfect brush, made me want to happy dance, opaque in two thin coats. Spring Break was ok but had a DREADFUL brush, weirdly fluffy on the end which made it fricking difficult to make a neat line. Honolulu was a bit of a gluggy nightmare and needed four coats for full opacity. Frog Prince was ok but a little thick and was opaque in two thick coats, as was Blue Marlin. Silver glitter smells frickin WEIRD and was super thick but not as gritty as I was expecting, only needed the regular one coat of top coat to smooth out, and was super dense - I only used one coat on each nail. Ulta3 recently moved production of their polishes from Australia to China, and many people have commented that the formulation has suffered somewhat from the move. Eighties Fuchsia is the only polish in this manicure which was made in Australia (I only bought it  a couple of days ago, but you can still find the odd Aussie Ulta3 here and there) and it had the best formulation. Go figure...

Below is before I put glitter and top coat on:

Blue Marlin and Honolulu had quite a glossy finish, Frog Prince slightly less so, and Eighties Fuchsia and Spring Break had the same slightly rubbery finish as Sunset Pink.

And here it is with glitter! 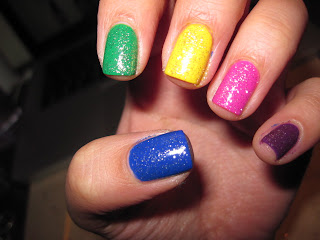 The top photo is more colour accurate (surprisingly so, as I didn't even have to colour correct it - maybe having so many bright colours in the one image helped the camera's sensor calibrate properly or sumfink?) but yay! Glitter! I love me some glitter.

A gorgeous, gorgeous Essie for you today. This is Smooth Sailing, which I picked up with my other Essie in Adelaide. Smooth Sailing is a dusty cornflower blue with tiny glass flecks in it - they look silver from a distance but if you look reeeeeeeeeeeeeeaaaaaaally closely you can actually see that they're a mix of pale pink and pale blue flecks. 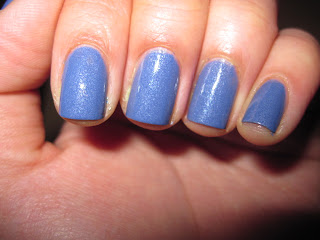 Application was glorious! I have heard time and again from many bloggers how much of a joy it is to do a manicure with Essies and I have to say, it's all true. This picture (as are all my pictures) is with absolutely no cleanup. The brush was perfect and made it super easy to get a neat line, and it was the perfect consistency, like butter. I bought 14 Essies from Ozsale when they had their Essie sale (and my bank balance hated me for it!) and can't wait for them to arrive :)

A super bright and cheerful mani today - my flatmate said my nails looked like Christmas :) 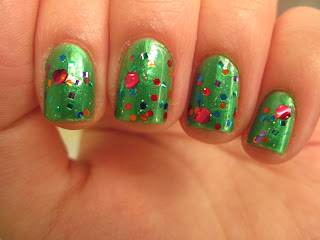 This is three coats of China Glaze Paper Chasing, a sheer apple green shimmer, and one dabbled coat of Lush Lacquer Lite Brite, a clear base with small brightly coloured square and hex glitter, large pink hexes and tiny holographic glitter. To get this coverage I swirled the brush around in the bottle, then plonked the brush horizontally onto the nail to get all the glitter on, and didn't swipe as this just wipes the glitter right off again. I've had Lite Brite for maybe three months and in that time I think the large pink hexes have "tacoed" slightly (curled up, like a taco shell) so I needed a lot of top coat (three coats I think!) to smooth out any pointy edges. Still, it's a super pretty glitter and I'll give this another go over a different coloured base - although next time I might try and flip the hexes so the taco-ey points are pointing into the nail bed :)

PS Lush Lacquer is available at Etsy and they currently have Lite Brite in stock. Shipping can be a little slow as this is a small mother and daughter team making the polishes but they are really good at keeping customers updated through their Facebook page.

PPS I bought Lite Brite for my own use. No one has sent me free polish to review...yet!
Posted by Unknown at 1:00 PM No comments:

Another Ulta3 for you today. This is Sunset Pink, an intense blue-toned pink creme (it kind of reminds me of those Redskin lollies you used to get as a kid - I wonder if they're still available? They're delicious!). 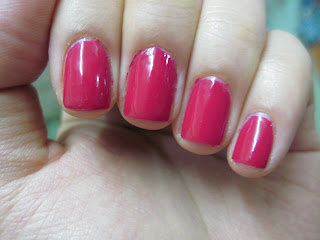 Application on this was not awesome - it's quite a thick and gluggy polish and did not want to level on the nail at all, and I actually ended up with a weird lump on the tip of my thumbnail where the excess polish did not smooth out. The finish on this without topcoat is not quite gloss, not quite matte - sort of an in between rubbery look, which I quite liked, but ended up using top coat to try and even out the lumps. I might try and add thinner to this so I can wear it without top coat in the future.

Robyn x
Posted by Unknown at 1:00 PM No comments: